Home Tools About Me

Google Tag Manager team has just added, in a stealth mode, a new Test API for the Custom Templates. This Test API will allow us to define some Unit Tests in order to be able to automate the testing of our template before publishing them.

You will find a new tab within the templates editor named "test" where you will be able to run some code before the tests start, and then add a set of unit test to run each time you want to test your library.

For those who are not much into the programming according to the Wikipedia a Unit Test is:

In computer programming, unit testing is a software testing method by which individual units of source code, sets of one or more computer program modules together with associated control data, usage procedures, and operating procedures, are tested to determine whether they are fit for use.[1]

In essence, they're automated tests that make sure that a certain part of program execution, a unit, is working as expected. For example, if we were writing some unit tests for a page, we would be writing some Unit tests for example for checking if the contact form works, another to check if the add to card works, another one for testing if the search engine works, or if the current pages contain some specific elements.

Unit Tests are also exported/imported, so this would help people that need to tweak any template to have their new code tested if the original author provided all the needed unit tests for testing the template.

Setting up the Unit Testing may look like a tedious and time-wasting task the first time you have to deal with it, but with the time you'll widely recover all the time invested ( NOT WASTED ) while setting up the tests.

This new Test API doesn't need to be initialized as the other ones since it's run within its own section of the editor and its looks it's already enabled there and it provided 5 new API's we can use to defined and run our unit tests:

I'm trying to show some simple examples of how these APIs work with examples. If you want to dig deeper I suggest you going to the official developer site for the Test API for a further read: https://developers.google.com/tag-manager/templates/api#runcode

This API will return a matcher object that we will able to use to make asserts against the given API.

For example, each tag execution must contain one call to gtmOnSuccess. Would make no sense having 2 calls to success within a single tag execution that could mean that we're firing it at some point when it's may not be true. Let's write an API assertion to check that gtmOnSuccess is being called just once.

This is our test current custom tag code 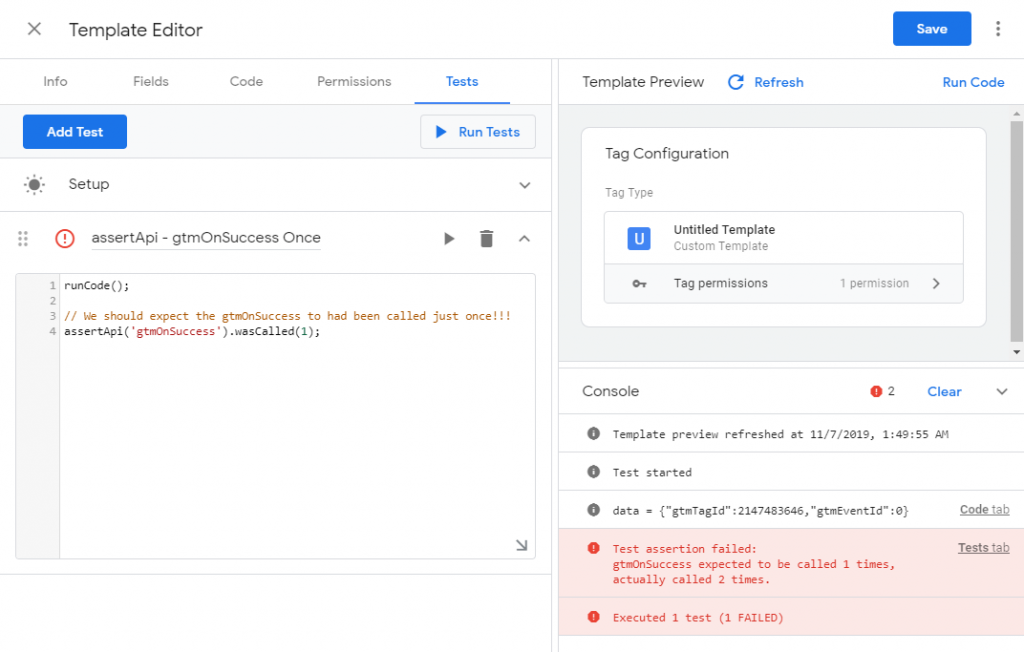 There're not many details about the currently supported subjects for this assertion tests. I'll try to keep the following table updated as long as I find/test them out.

This API will allow making the assertions against our variables or subjects. It has been designed based on the Truth library by Google, which is a library for running assertion tests for Java and Android. You can find more info in the official URL: https://truth.dev/

I'm not sure if all the subjects available on truth and that been currently modeled into the Test API For GTM, but you can find a list of officially provided one in the project GitHub repository, in case you're curious about it: https://github.com/google/truth/tree/master/core/src/main/java/com/google/common/truth

For this let's imagine that we have a variable that we expect to be returning "SIMO" as a string, ok?. For this test, we'll write a small variable that returns "DAVID" instead of our expected value in order to test an assertion.

Now, we'll write a simple test that run an assert to test that the value returned by the variable actually is "DAVID" 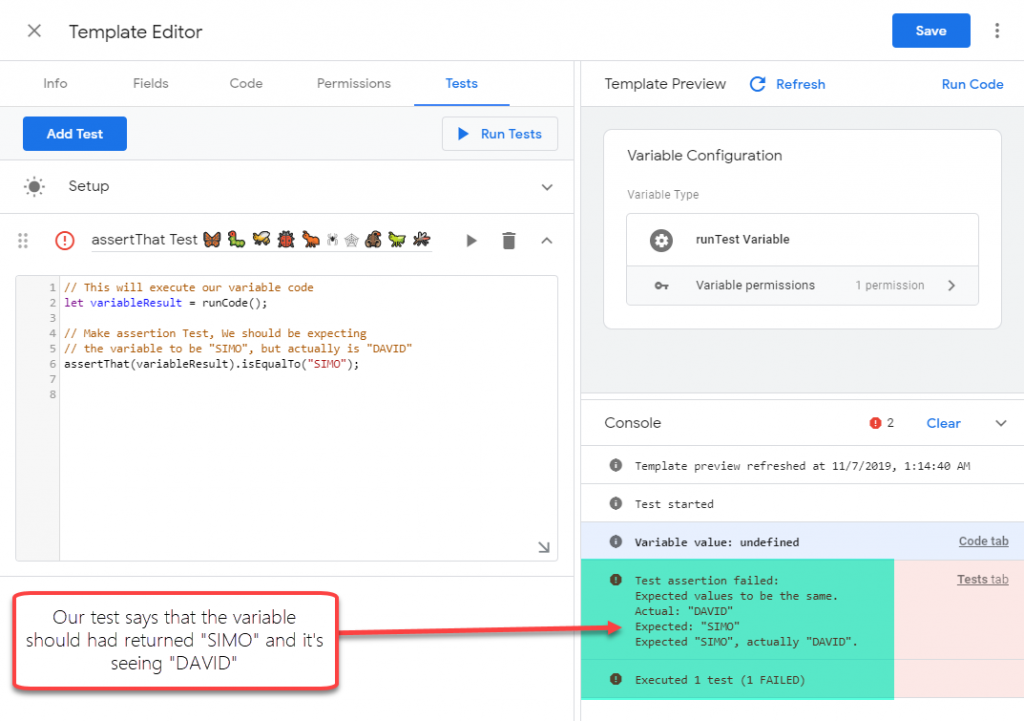 There're not many details about the currently supported matched subjects for this assertion tests. I'll try to keep the following table updated as long as I find/test them out.

This API will allow us to replace or override the current Sandbox API's functionality.
Let use the following Custom Variable Code

If we run variable we would expect to have the testValue to be the URL encoded, but we've mocked the encodeUri API in our test to return a fixed value: 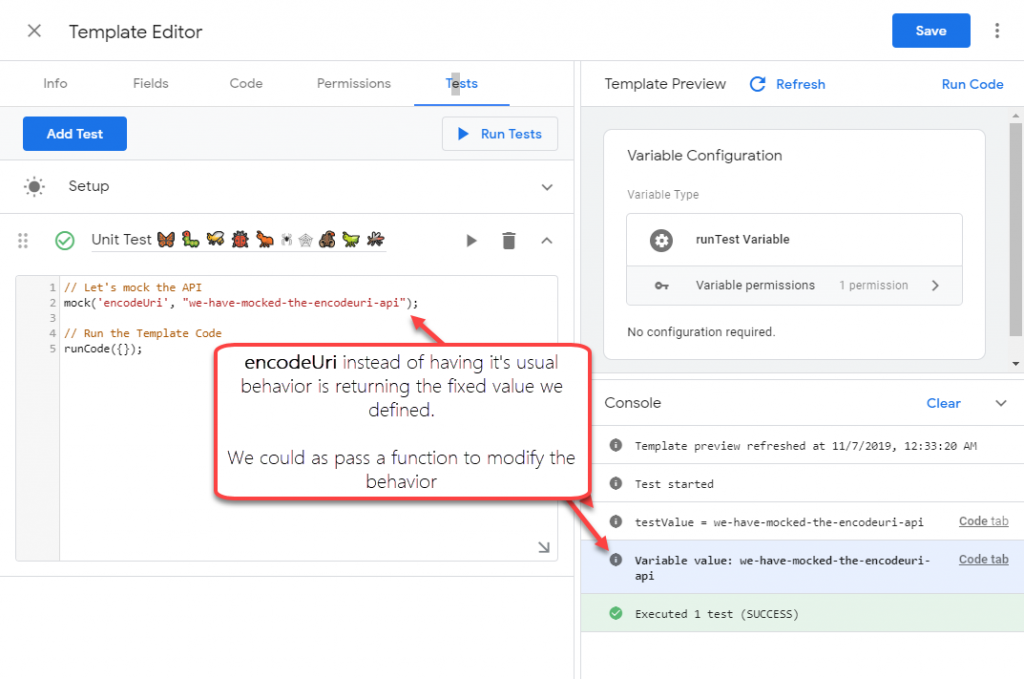 This API actually takes care of running our template code. It optionally accepts a data object as a parameter and it will return a value if we're testing a Variable or undefined in any other case.

Passing an object data will allow us to set some values for the current tag/variable without the need to manually fill the data into the template fields.

In the example above the data.measurementID variable will hold the value 'G-XXXXXXX' even w didn't populate our field.

Google Tag Manager is giving us the perfect tool ( as a start ) for being able to have some fail-proof containers and code. AFAIK it seems the library is supporting some basic matchers, but I expect them to be expanded in the future ( or documented! ).